I purchased this 1993 Land rover in 2017 and have spent the last 5 years fully restoring this vehicle. I am British and moved to FL 12 years ago and always missed the classic land rovers that I grew up around. This NAS (North America specification) Land rover is 185/500 ever imported to USA as a factory LHD version with some additions for the USA market.

I purchased this land rover in rough shape, it hadn’t run for years and had sat outside uncovered for years. I have restored several of these vehicles over the years so knew it could be brought back and improved upon its original condition.

Once getting it into my workshop I stripped the vehicle down to a bare frame. After that was completed, we sandblasted the frame and began repairs. A new genuine rear cross member was installed along with the front outriggers. After this was completed, the frame was sandblasted again and then powder coated.

5 new doors were purchased, a new hood and numerous other replacement body panels were purchased or repaired to perfect condition. Every body panel was stripped completely and was painted individually off the vehicle. I decided to paint the defender in ford tuxedo black (This has the perfect amount of metallic in the paint and looks amazing in the sun). I chose to upgrade the hood to a PUMA style with the flare (Genuine land rover hood was used). I also upgraded the grill and headlights to a modern style (KBX grill) Led headlights. Rock lights were also added.

We also added metal rock sliders, full roll cage with ladder and cargo rack on the roof. All of these were also powder coated in the same textured black for durability. The exterior also has a winch bumper that have daytime running lights with a warn winch with wireless remote (Never used or unspooled). A swing away spare wheel carrier with the 35 inch tire. I used genuine land rover alloys along with 35” tires.

The driveline received some serious improvements, I started by stripping both axles completely, they were then chemically stripped, and sand blasted & powder coated. I then used LSD diffs from Ashcroft transmissions in the UK. We also upgraded the shafts, bearings, and anything else we could as per their recommendations. I converted the brakes to disc all around and brand-new calipers (genuine) were used. The transfer case was refreshed and upgraded in any way possible. Upgraded driveshafts were sourced and used for the additional power that the defender was going to be making.

For the suspension a small lift kit was used supplied by rovers north. It clears the 35’s perfectly without being to big. The steering box was replaced and all the steering components were also upgraded to handle the larger tires. FOX shocks were used to make the ride quality the best it could be.

I used a 6L LS engine. This engine was sourced from a low mileage vehicle and then was fully disassembled by a local engine builder. Every single company was replaced and upgraded within this engine. We installed a stage 2 cam (sounds great & very powerful) upgraded pistons & rods, valves, oil pump etc.

I then used a Holly standalone ECU and Holly wiring harness, the engine has a upgraded intake. A custom aluminum radiator was made to maximize the space within the defender chassis. We used an AC kit from restomod. Hours were spent ensuring that the engine bay was as clean as possible. The engine got a custom tune based on it’s upgrades and is estimated to be around 500hp. An upgraded FTI stage 2 turbo 400 transmission & FTI torque converter was used for reliability.

A custom exhaust was made. I didn’t want to have it too loud so CAT’s/Silencers were added where necessary, but it sounds great. (Watch video)

The original wiring was always known for being terrible within Land Rovers. During the restoration every single wire was stripped from the vehicle and thrown away. I used a painless wiring harness and eliminated any wiring issues.

Prior to installation of any interior the inside was fully dyno matted along with sound deadening material used on all areas possible.

An Genuine LHD PUMA dash was sourced. This gives the defender a much more modern feel, A digital Holly Dash was used to manage the engine/speedo etc. This is fully customizable so the driver can have the dash displaying exactly what they want. The original center piece of the dash was modified significantly to simplify the design and provide a blank canvas for the large touchscreen head unit I wanted to use. This will do car play/android, it also has a backup camera, radio, internet plus a bunch of other features.

AC was added by using a restomod air kit. This keeps the car very cool even in the summer months in FL. A full premium carpet kit was added to the whole vehicle. The headliner was recovered in a premium black Alcantara material. Genuine rubber floor mats were used. Custom seat brackets were made and comfortable black reclining vinyl bucket seats were sourced. It is currently setup with 2 in the front and 2 in the middle. You could easily add additional seats in the rear if you wanted to. I wanted it to be comfortable to drive long distances if needed. An upgraded steering wheel was sourced from Rovers north and installed.

No expense or time was spared in the restoration in this vehicle. I purposely didn’t rush the restoration as I wanted to make the best possible defender. It recently just had a $4000 paint correction by Ceramic pro in Sarasota. I have only driven it 100 miles since it was completed as I have a collection of other vehicles. It has always been stored inside since the restoration. Title is a salvage/Rebuilt title. FL title in hand. 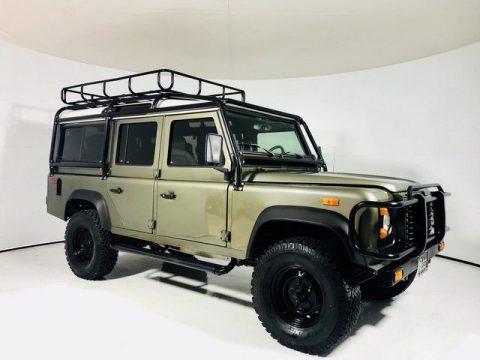 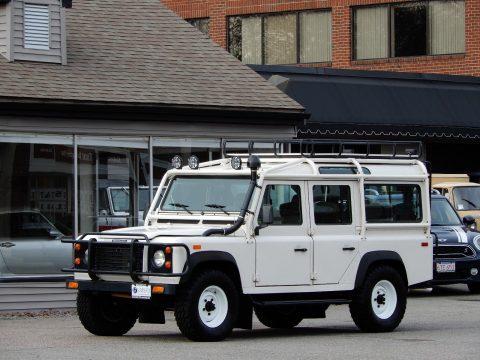 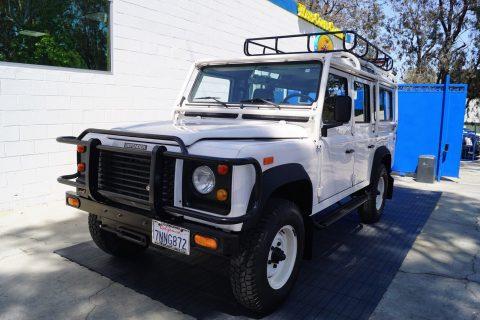 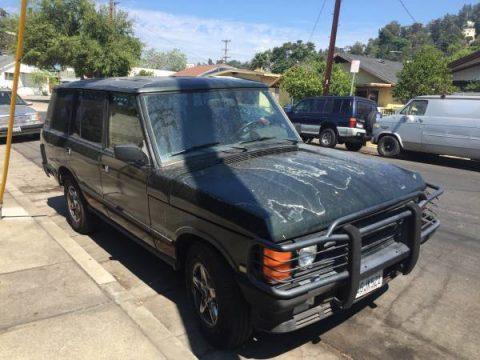 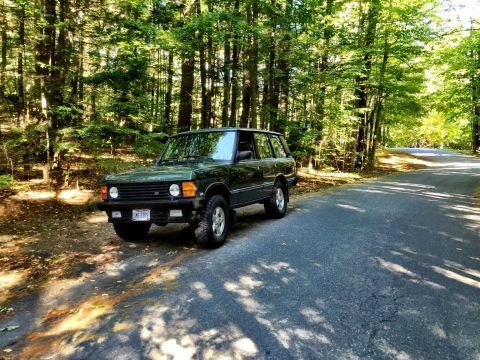